"Midwinter hot spring yoga" "Yoga walk to find spring" "Temple yoga" "Hotaru night yoga" "Mountain stream babbling yoga" ... "Travel yoga in Ichihara" with interesting programs planned in the future.Even beginners can participate in this project, where you can enjoy the seasonal natural beauty of the city, local specialties, and interact with local people while experiencing yoga, and get people to like Ichihara City.In December of last year, we started with "Wooden School Building Morning Yoga" held at Uchida Mirai Raku School, where you can enjoy a lunch full of local vegetables.Planning and sponsorship is by Emi Hori (12) of the Ichihara City Regional Development Cooperation Corps.I visited my home in the Yoro Valley and talked to him.

Mr. Hori is from Ichikawa City.When I was a kid, I dreamed of becoming a fashion designer because of my mother who was working in kimono.When he was a student, he was interested in dance, made his own props, practiced for months, and made stage presentations.Regarding the encounter with yoga, "After graduating from university, I continued to perform while working in a dance studio. At the age of XNUMX, a dance teacher said," Yoga seems to be really good these days, "and I think I should try it myself. I started thinking. "The reason I became an instructor was, "The year after I started yoga, I participated in an event. The hard program made my head empty, and it was a strange feeling that all the daily conflicts and worries were gone. You may be swayed by emotions of emotions and your ego, and you may have a hard time, but what you want to practice in yoga is to take a step back and watch over your condition at that time. I was impressed by the fact that I should be aware of it, and I wanted to convey this to myself, so I aimed to become an instructor. "
Mr. Hori's characteristic of yoga is "to experience in nature. It depends on the weather, but in order to be released from the core of the body, it is more human in nature than in the room. Because it is an animal, you can relax your body and expect good reactions and changes. Rather than whether or not you can do yoga movements, let's put yourself in nature first, I think that such an experience is a rich time. I will. "

The Ichihara City Regional Development Cooperation Corps is a city initiative aimed at revitalizing the region by inviting young people from urban areas to the southern part of the city where the population is declining and the birthrate is declining and the population is aging.The cooperative team aims to create a sustainable community through various activities by cooperating with local residents and groups while living.
Mr. Hori, who lived in Arakawa Ward, learned about this system when he thought that he could not pretend to be depopulated in the area. "When I jumped in, I wanted to make a realistic move in a municipality where I could take good care of both personnel and finances. Rather than worrying about this, let's take action first!" First of all, I visited the Regional Revitalization Promotion Office, which is the section in charge of the cooperation team, where I was introduced to a successful example of a senior named Yosuke Takahashi, recommended by others, and the birthplace. However, my parents used to live there, and I was pushed back by the fact that the now vacant house was in the Yoro Valley. " 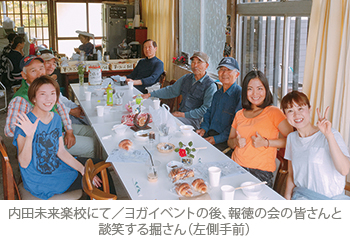 And in June of last year, he was nominated as a cooperative team and moved.He has held various yoga events and has continued community activities.Looking back, he was impressed. "Above all, the hearts of people are warm. When Typhoon No. XNUMX came, power outages and water outages around my house continued for half a month. The heat was severe and I moved alone, so it was very delicate, but next door I was really grateful to the neighbors for their encouragement and worries, such as "Is it okay?" And "Isn't it difficult just to come?" Mr. Hori realized that it would be a force for time.To help someone, I went to a local elementary school for three days in a row, distributed more than XNUMX meals of curry to people suffering from typhoons, and sowed seeds in hopes of the reconstruction of Ichihara. We distributed a lot of food at the event.

Ideas to liven up the area 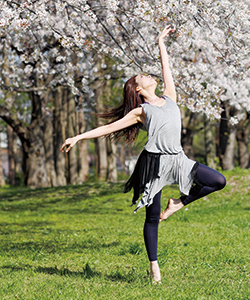 "I also want to make use of the music and dance that I have been doing for a long time, so if I can start a guest house or cafe, I would like to invite musicians to do live and yoga, and experience farming and yoga in the future. Based on yoga, I would like to develop various events with local people. I want the participants to enjoy yoga and the charm of Ichihara and to like Ichihara. " Mr. Hori's passion and idea to liven up Ichihara City with his special skill yoga is wonderful.
"Ichihara is a treasure trove. People are warm and there is abundant nature especially in the south, and you can enjoy the seasonal scenery that appears in Japanese folk tales. People who come from outside and live inside Together with us, we will discover good places and shed light on them ... I would be very happy if we could do that! " 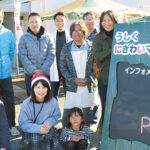